You can use the instructions on this page to create pre and post backup rules with Portworx Backup, which take application-consistent backups for MongoDB on Kubernetes in production.

MongoDB stores data files in a location called dbPath. dbPath is most often configured to use /var/lib/mongo. Some container images may also configure this path differently, so it is important to pay attention to dbPath.

When deployed with more than a single node, MongoDB has an additional component called Oplog that should be considered during backup. The MongoDB Oplog is a special capped collection that keeps a rolling record of all operations that modify the data stored in your databases. The Oplog can also be used for database recovery. Because the Oplog recovery can take a very long time, MongoDB usually is combined with regular database snapshots.

If you have not used Portworx, Portworx Backup, or run Data services on Kubernetes it is a good idea to review the following information:

Create rules for MongoDB that will run both before and after the backup operation runs:

Portworx Backup should flush writes to disk and lock the database to ensure a consistent backup. This is done using the db.fsyncLock() method.

Create a post-backup action that will administratively reduce the lock on the database following your pre-backup db.fsyncLock() operation.

Use the rules during backup of MongoDB

During the backup creation process, select the rules in the pre-exec and post-exec dropdowns: 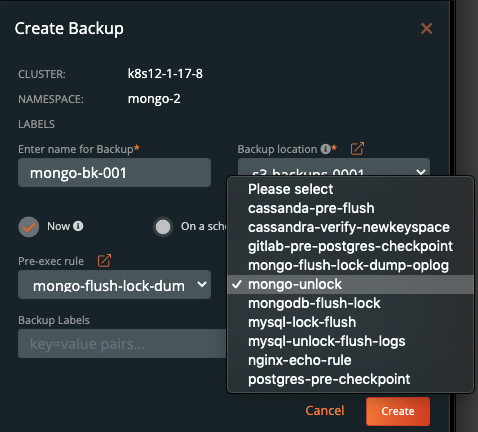 Once you have filled out the backup form, click Create.

Watch this short demo of the above information.